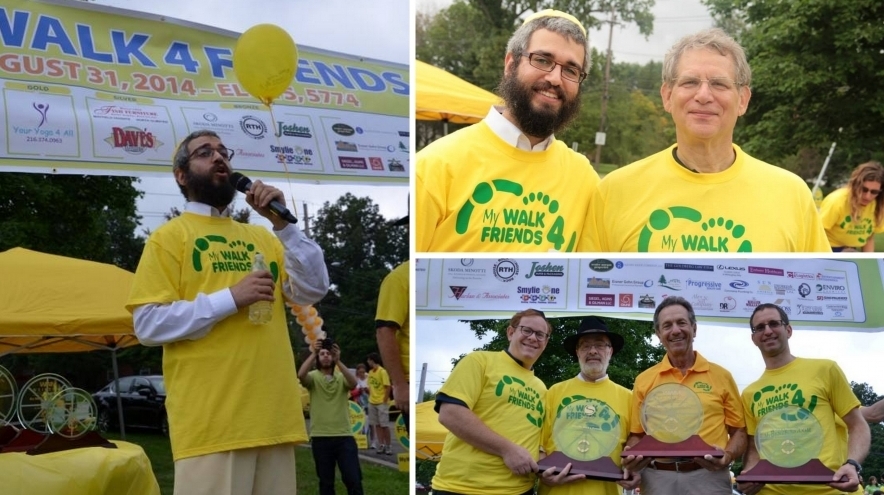 The Friendship Circle of Cleveland hosted its annual My Walk 4 Friends on Aug. 31 to benefit children with special needs and their families. The two-mile walk along Brainard Road kicked off at 12:15 p.m., starting and ending at the Friendship Circle’s building in Pepper Pike.

The Friendship Circle of Cleveland hosted its annual two-mile “My Walk 4 Friends” on Aug. 31 to benefit children with special needs and their families * A total of $336,641 was donated to the local Friendship Circle, directed by Chabad Shliach Rabbi Yossi Marozov

Though the weather was overcast, it didn’t rain on the walk, which is in its fifth year. The number of attendees surpassed last year’s turnout of 1,200. The Cleveland Jewish News served as official media sponsor.

Yossi Marozov, executive director of The Friendship Circle, said putting together the event required many volunteers and much strategizing, along with the right theme and entertainment.

“We feed off the incredible energy the community has,” Marozov said.

“I do this every year,” said University Heights resident Stuart Mintz, who has been participating in the walk for eight years and attends Beth El-The Heights Synagogue.

Aside from the walk, the event included food and entertainment, including a Ferris wheel, carousel, inflatables and music. Tables featuring local businesses were also set up, including bubble making with Galvin Therapy Center.

“One of the beautiful things about The Friendship Circle is we have this concept in the Jewish tradition that one commandment or good deed causes another,” said Beachwood resident Amalia Haas, who manned the HoneyBeeJewish table at the event, where she sold local raw honey.

“So the Friendship Circle is getting people to volunteer, and for those that are volunteering, they’re benefitting the children so much, but it’s transformative for them as well. That’s such a beautiful dimension of this project, and it really is a circle in that sense.”