This year, the Jews of Kishinev, capital of Moldova, observed the various laws and customs of Yom Kippur easily.

Prior to Yom Kippur, they came to the Jewish Center next to the large Chabad shul in the city to observe the ancient custom of kapparot, using white chickens. These were later slaughtered by shliach and shochet Rabbi Yaakov Shatz. 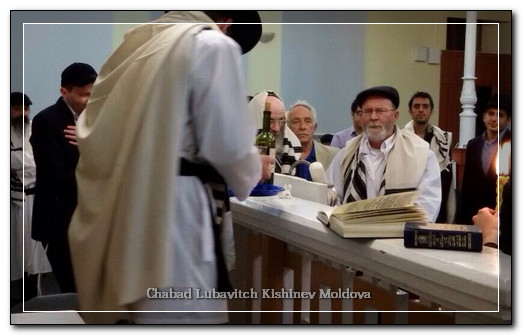 Throughout the month of Tishrei, yeshiva students Levi Abelsky, Mendy Maidanchick, and Yosef Levi put on tefillin with Jews throughout the city. Members of the Jewish community received pieces of the traditional lekach honey cake from head shliach Rabbi Yosef Yitzchok Abelsky on Yom Kippur eve in accordance with the traditional custom also observed by his late father Rabbi Zalman Abelsky.

Various activities were also held in memory of Rabbi Abelsky, who did a lot to revive Jewish life in Moldova, strengthening Jewish learning, observance, and prayer.

Yom Kippur prayers around the country

Hundreds of Jews crowded into Kishinev’s Great Synagogue, which is led by Rabbi Yosef Yitzchok Abelsky, Chief Rabbi of Moldova. For many of them, it was the first time they had ever observed Yom Kippur. The festival began with hundreds of women and girls lighting candles, while the men lit memorial candles.

Many people attended services the following day. Some of them were new to Jewish observance, while others only attended the Yizkor prayer in the memory of their parents and other loved ones. Many others joined the Neila service, the last prayer of the day. The service ended with a chorus of Napoleon’s March, marking the close of Yom Kippur. Everyone then sang and danced before the shofar was blown. After the evening service and Havdalah, everyone broke the fast with light refreshments before going outside to recite the Kiddush Levana prayer.

In other cities around Moldova, prayers were also held at synagogues run jointly with the Federation of Jewish Communities in Moldova. The shluchim and other Chabad workers made sure that services took place, giving the Jews of Moldova and Transnistria the opportunity to connect with their Maker on the holiest day of the year.