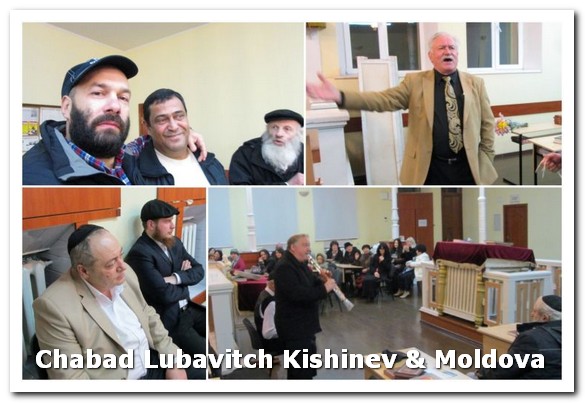 Invited to play was the award-winning global clarinet artist, Hanan Bar-Sela. With his extensive knowledge and exquisite compositions, he arranged beautiful and soulful Chabad Melodies in an equally original yet unique and creative way. Through his compositions and performance, Bar-Sela shared the beautiful story of Jewish music, its history and melodies, like its never been done before.

Kishinev music critics attended Bar-Sela’s performance, interested in the global well-known musician and to experience Jewish music at its finest. Critics were stunned as they watched the concert’s formal setting with the deep engaging music of the Chabad melodies turn into a close Chassidic gathering, commonly known by Chassidim as a ‘farbrengen.’ Audience members joined in singing with the clarinet’s graceful tones and even stood up to dance when the melodies transitioned becoming more lively. Never before had critics seen an entire audience join in with such knowledge (of the music) and enthusiasm of the music’s message, like they did at Chabad’s performance of Chassidic music by Bar-Sela.

Bar-Sela’s performance exhibited rare musical talents and beautiful segments that both thrilled and touched the audience. One composition alluded to the High Holidays. The shofar was sounded, as is customary during the Jewish month of Elul and on the holiest days of Rosh Hashanah and Yom Kippur, followed by the well-known Chabad melody of Avinu Malkeinu.

Another highlight of the evening was a segment featuring the Alter Rebbe’s famous tune of Arba Bavos. This soulful song, commonly played at weddings and special occasions, was performed with such grace and deep emotion that undoubtedly the whole audience was moved.

Everyone enjoyed the evening filled with gorgeous compositions, but it was the last song of Bar-Sela’s performance that really touched the old-time members of the Kishinev community most. The well-known Jewish folk song, ‘A Yiddishe Mama’, was dedicated to Mrs. Leah Abelsky, wife of the late Chief Rabbi of Moldova and founder of Jewish life in the country, Rabbi Zalman Abelsky.

As a whole, community members were thrilled with the excellent musical production and Chabad of Kishinev’s arrangement of the event. They are looking forward to additional events to bring the community together.