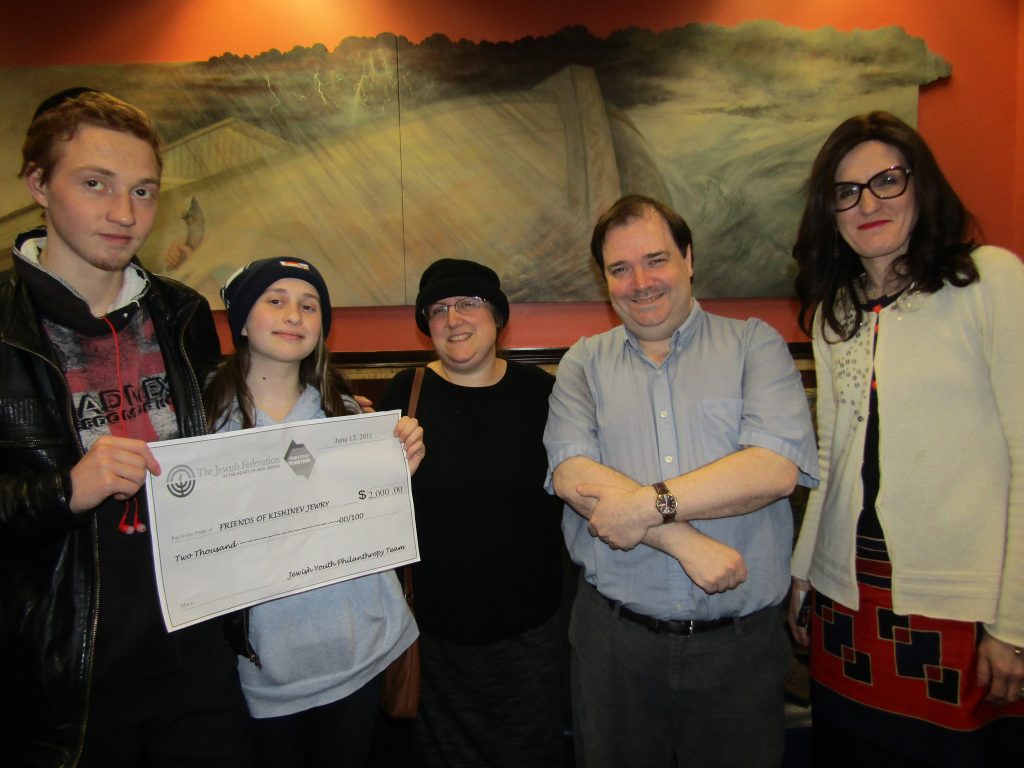 The Frisch group was led by Judith Rosenbluth, now a 17-year-old junior, of Highland Park, whose parents, Dr. Jonathan and Chaviva Rosenbluth, have been financially supporting the Chabad program in Moldova, officially called Friends of Kishinev Jewry, for years.

Last year, inspired by her parents’ dedication to helping a tiny community of poverty-stricken Jews with little or no other means of support, Judith encouraged her friends to join her in the establishment of a Frisch student club they dubbed “Moldova Matters.”

Part of the Soviet Union until the USSR’s dissolution in 1991, Moldova, a small land-locked country bordered by Romania to the west and Ukraine to the north, now considers itself an independent republic.

In Jewish history, the area is notorious for the horrific pogroms that rocked its capital, Kishinev, in 1905. In 1941, the Nazis invaded and seized the entire area, which included 270,000 Jews. Before Moldova was recaptured by the Soviets in 1944, almost a quarter of a million Jews had been murdered.

After the war, the Jewish community began to regrow, and peaked to almost 100,000 in 1970. Very quickly, however, many of these Jews left for Israel. As of 2014, the official census showed 15,000 Jews in all of Moldova, most of them in the capital.

In 1995, Rabbi Zushe Abelsky, a member of the Chabad movement, established Friends of Kishinev Jewry, a multi-faceted non-profit organization designed to nurture the remnant of the Jewish community in the area.

“In those days, during Moldova’s newly-found independence from the Soviet Union, inflation was rampant, the economy was in tatters, crime was rampant, and those who could fled to other lands. There was a critical necessity to protect, revitalize, and invigorate the remnants of the once-great Jewish community,” said Rabbi Abelsky. “With this famous and once-vibrant community severely depleted through the scourge of the Holocaust, decades of Communist repression and youth emigration, we realized we had to take the lead role in rekindling the warmth and vitality of this amazing people and their heritage.”

To that end, Rabbi Abelsky and his staff provide spiritual sustenance as well as tons of food, clothing, medical supplies, and stipends for living expenses, which they distribute to some of the poorest of world Jewry.

They operate not only in Kishinev, but also through outreach programs to other parts of Moldova where even smaller numbers of Jews reside.

From Tiraspol to Frisch

One of those towns is Tiraspol, Moldova’s second most important city, located a little over an hour’s drive from Kishinev. In Tiraspol, where there are about 2,500 Jews, Rabbi Abelsky discovered Alyssa Panga and Garrik Sementin.

Equally important, so did Judith Rosenbluth and her friends at Frisch. One of the most important activities undertaken by Moldova Matters at Frisch was to initiate pen-pal relationships with Moldovan teens who were just starting to learn about Judaism, thanks to the efforts of Rabbi Abelsky. As part of their program, the Frisch students prepared a few video presentations explaining what Judaism meant to them.

The highlight of Moldova Matters occurred when the Moldovan-Jewish teens gathered together in Kishinev to watch the final evening of spirited singing and dancing during a live-stream of the Frisch School’s Shiriyah program.

“After watching Shiriyah, the Moldovan kids told us that they were so inspired to see hundreds of Frisch kids so excited about Judaism. We were able to use the Moldovan kids’ comments as a recruiting tool to get even more Frisch kids interested in joining Moldova Matters,” said Judith.

Her original plan was to bring a number of the Frisch students to join her in Moldova for Pesach 2017, but, when that idea did not pan out, she came up with another strategy to help reinvigorate the small Jewish community so far away. She offered a presentation to another group to which she belonged: JTeam Teen Philanthropy, a program run by the South River-based Jewish Federation in the Heart of New Jersey. Advocating for Friends of Kishinev Jewry, Judith succeeded in winning a $2,000 grant for them.

Back in Moldova, it was decided that the best use of the grant money would be to sponsor a trip to bring two Moldovan teens to the US to see upfront the vibrant Jewish community that had befriended them.

The plan was to bring them to New York to participate in the February 23-25 Chabad C-Teen Convention, a global network of Jewish teenagers whose lives have been influenced by Chabad.

“They also wanted to thank the students at Frisch who had made it all possible, especially Judith Rosenbluth,” said Rebbetzin Chaya Abelsky.

A lottery was held in Moldova, and the winners were Alyssa and Garrik. Their winning was very meaningful to Rabbi Abelsky who said that, for the last two years, the young man had been attending Chabad programs which were held in Tiraspol only on Sundays.

“That meant Garrik was putting on tefillin only on Sundays, and, after a while, that became not enough for him. He desperately wanted his own set of tefillin so he could put it on every day. I posted his request on Facebook and, in ten minutes, I got a response from a nice fellow in California, who had never heard of us before, but agreed to sponsor Garrick’s tefillin,” said Rabbi Abelsky.

Born in Moldova, Garrik Sementin and his mother briefly left Tiraspol for Israel when he was five years old and she had remarried. Alyssa Panga, her second child and Garrick’s half-sister, was born in Israel, but, very soon afterwards, the family returned to Tiraspol.

Today, Alyssa attends high school in Tiraspol, and Garrik is a student at the University of Ushinsky in Odessa, where he is studying to become a teacher.

After they won the funding and bought their tickets, it seemed for a while that Moldovan bureaucracy might prevent Alyssa and Garrik from coming to the US after all. Securing their travel visas took all of Rabbi Abelsky’s diplomatic skill, including a call to the American Ambassador to Moldova, Jim Pettit, who, in the past, had visited the Chabad shul in Kishinev. Two days before their flight, Mr. Pettit helped make sure rush visas became available for Alyssa and Garrik.

To get on the plane, Alyssa, Garrik, and 15 other young Jews from the region whose tickets were funded through a variety of other venues, traveled eight hours from their homes by bus, first to Odessa and then to Kiev in Ukraine.

The group was met in New York not only by their hosts in the Chabad community in Crown Heights, Brooklyn, but also by some former Moldovan residents who have become part of the Chabad community and were able to serve as translators. As long as Moldova was part of the Soviet Union, its language was written in Cyrillic letters and called Moldovan. When the country became independent, the language was written in Latin script and called Romanian, recognized as a subdialect of the language spoken in neighboring Romania. Today, the language is called by both names.

At a dinner in Noah’s Ark in Teaneck, Alyssa and Garrik described their trip as “unbelievably amazing.” They had a chance to experience Jewish life and meet Jewish teenagers from across the US and the world, as well as tour many of New York’s iconic landmarks that were especially meaningful to teenagers, including a boat trip to the Statue of Liberty and a look at the Hard Rock Café.

The only disappointment was that they could not meet Judith and her friends. As luck would have it, the C-Teen Convention was held just when Frisch sponsored its Junior FreezeFest, an annual student trip to Quebec, Canada, that many students eagerly anticipate since the start of their high school careers.

At the dinner at Noah’s Ark, Alyssa and Garrik were able to express their thanks to Judith through her representatives, including her parents; her sister, Naomi, 11; her brother, Gabriel, 7; her cousins, Yitzi, 12, and Moshe, 10; and her grandparents, Dr. Richard and Susan Rosenbluth.

Alyssa and Garrik said that, in no small part because of their experience in the US, they hope to make Aliyah to Israel “as soon as possible.” Alyssa wants to study journalism in Israel, and Garrik hopes to teach young children in the Jewish state.

They hope those in the US who want to become involved in the struggle to maintain Yiddishkeit in Moldova will contact Rabbi Abelsky through his Friends of Kishinev Jewry website, http://fokj.org/; his email address, fokj@kishinev.org; or Rebbetzin Abelsky’s email, chaya@infiniti-coaching.com.

“Even though we didn’t meet them in person, we intend to stay in touch with the Frisch students as well as many of the teenagers we met through C-Teen,” said Garrik.