2018 – Moldova Experiences the Holiday of Freedom 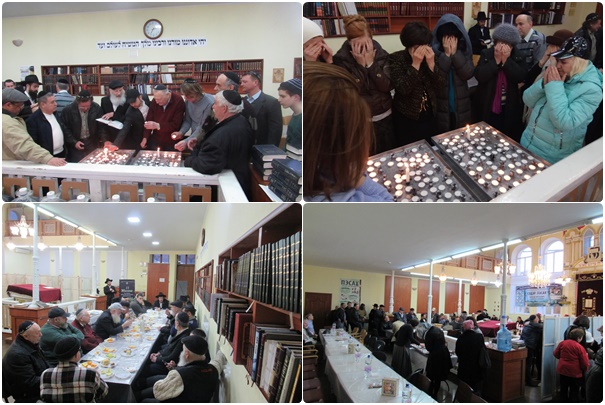 Hundreds of people partook in this year’s variety of Passover celebrations. The atmosphere of the holiday was already felt in the synagogue a few days before the holiday began. Matzohs were distributed to the many Jews who had requested. The men had the opportunity to don the Tefillin, with the assistance of the student Rabbis. On the 14th of Nissan (March 30th), they did the traditional burning of the Chametz in the backyard of the synagogue. As the Pessach preparations took place, the excitement and anticipation for the upcoming holiday was palpable.

On the first two nights of Passover, about 200 people attended the community Seders in Chisinau! The Seders were led by Ariel Balon, one of the student Rabbis. All the participants of the Seder fulfilled four basic commandments of the holiday; they read the Passover Haggadah, ate the proper amount of matzah, and tasted maror and haroset. They also drank the four cups of wine. The Seders were very lively and exciting, and continued into the wee hours of the morning.

Two student Rabbis, Barak Spolans and Yehuda Baredi, came to Moldova specifically to help celebrate the Passover holiday the city of Bendery. The boys went to Bendery on the eve of the holiday, taking with them Matzah, wine, grape juice, and everything necessary for a Seder. Seder Pesach was organized for the members of the Jewish community of Bendery in a rented hotel restaurant. The participants from Bendery were so grateful for the incredible Seders arranged for them.