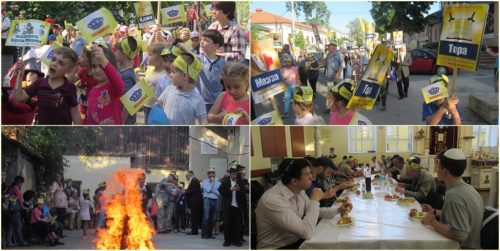 Hundreds of Moldovan Jews: men, women and children. Took part in the Lag B’Omer events. That took place in the Jewish kindergarten and in the Chabad synagogue in Kishinev.

The participants marched from the Chabad synagogue, to the center of the city.  As is customary to do on Lag B’omer. Everyone then gathered to light a bonfire, in honor of Rabbi Shimon Bad Yochai, who passed away on Lag B’omer.

The 18th of Iyar marks the passing of the grandfather of the Skulener Rebbe, who is buried in Moldova. Rabbi Hersh Portugal arrived at the Chabad House when the preparations for Lag B’Omer were at their peak. He met with the Chief Rabbi of Moldova, Rabbi Yosef Abelsky, and with the shliach, Rabbi Mendy Axelrod. Rabbi Portugal expressed how impressed and excited he was by the fact that Rabbi Abelsky continues his late father’s rabbinate, and that the Jewish community in Moldova is so active.

On Lag Ba’omer eve, dozens attended a special gathering for female students at the home of Rebbetzin Leah Abelsky, led by Mrs. Chaya Mushka Axelrod. This gathering lasted until the late hours of the night.

On Lag B’omer morning, there was a parade and program in the kindergarten, for the children to be able to participate in the festivities. In the afternoon, was the grand parade for men, women and children, which left from the synagogue, and continued into the main streets of Kishinev.

As the procession marched through a city street, Rebbetzin Abelsky suddenly noticed the man standing and photographing the event. She approached him, and asked him about who he was and what his interest in the parade was. The man shared that his name is Jason, and he is a resident of Atlanta. Jason was indeed Jewish, and was excited to experience a Chabad event on a visit to a foreign country. He admitted that it was his first time attending a Chabad program. He excitedly told Rebbetzin Abelsky that he was enjoying it so much, and intended to attend more Chabad events!

At the end of the parade, everyone gathered around a large bonfire, and joined in singing and dancing, as is customary on Lag B’omer.